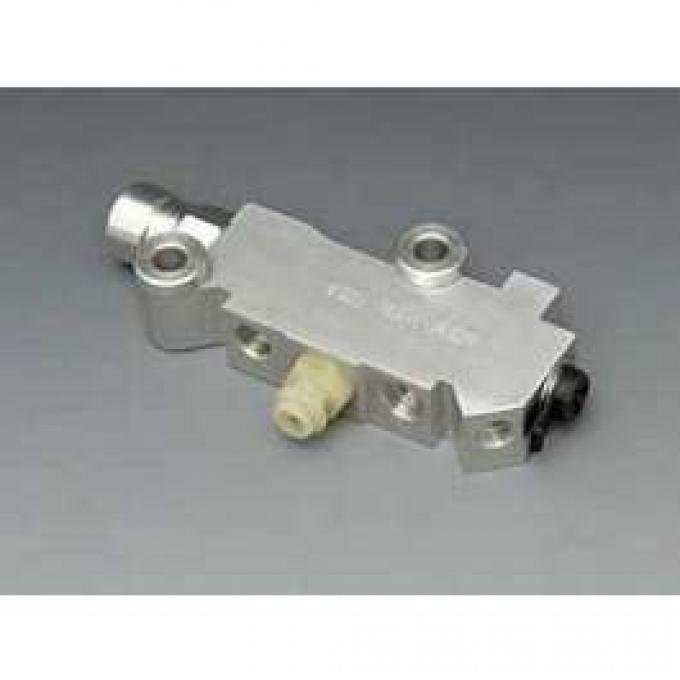 Replacement Of Original Beautifully Machined Out Of Billet Aluminum Standard Thread Block, Can Replace 1982-87 Metric Thread 1.25 Block With Modifications Required On All Dual Master Cylinder Installations Provides Even Braking For All Four Wheels Use With 4-Wheel Drums, Front Disc/Rear Drums Or 4-Wheel Disc Brakes Comes In Natural Finish, Can Be Polished To A High Luster The proportioning valve on your 1959-1987 El Camino is responsible for proportioning the disc brakes on the front wheels and the drum brakes on the rear wheels. It does not allow any pressure to the disc brakes until a pre-determined pressure has been reached. If the proportioning valve were to stop working, and equal braking force were applied to all four wheels during a stop, the rear wheels would lock up before the front wheels, which can be extremely dangerous while on the road. If you can feel a difference when coming to a stop between the front and rear wheels, then it is time to replace your disc and drum brake proportioning valve. The El Camino Store offers a new production proportioning valve, matching factory specifications and replacing your original proportioning valve. This part is manufactured out of billet aluminum, with a polished finish. Not only will this replacement valve make braking feel smoother, it is essential in keeping you safe on the road when unpredictable stopping may occur. Trust The El Camino Store for all of your restoration and replacement needs for your 1959, 1960, 1961, 1962, 1963, 1964, 1965, 1966, 1967, 1968, 1969, 1970, 1971, 1972, 1973, 1974, 1975, 1976, 1977, 1978, 1979, 1980, 1981, 1982, 1983, 1984, 1985, 1986, or 1987 El Camino!