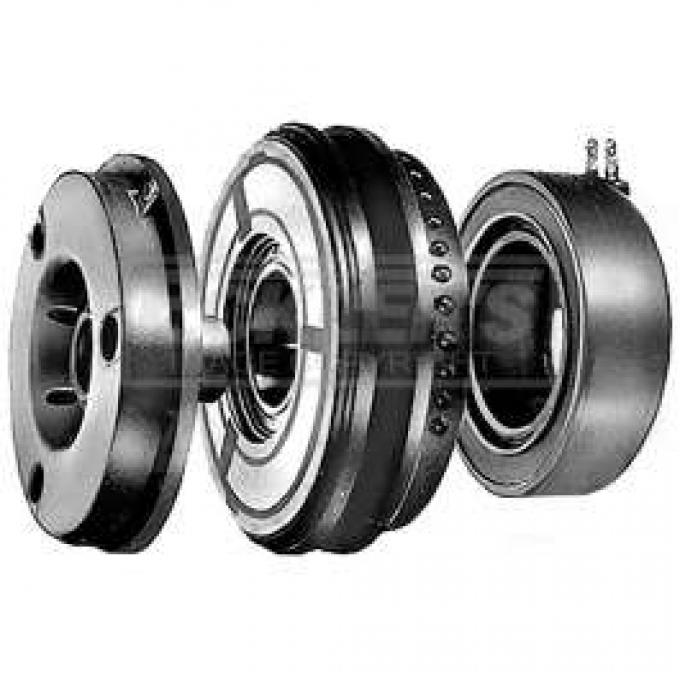 Restoration Correct Original AC Delco Part Correct Fit And Finish Fits Inline 6, V6 and V8 Engines Made In USA Is the ac compressor not working on your 1965-1981 El Camino? The El Camino Store offers this factory AC Delco replacement Reman AC Compressor Clutch for the A6 comprerssor. When the electromagnet inside the ac clutch assembly turns on, it produces a powerful magnetic field through the rotor. Since the fan belt rotor and the air conditioner rotor are both made out of iron, the magnetic field magnetises both of them, pulling them towards each other. This causes the friction plates to push tightly in to each other. Initially, the rotor friction plate is turning and the compressor friction plate is not. Once they are touching, however, friction between the two plates makes the air conditioner rotor spin. When the electromagnet is turned off, the friction plates spring apart and the compressor stops moving. Don't settle for just any replacement part, use AC Delco what came on your 1965, 1966, 1967, 1968, 1969, 1970, 1971, 1972, 1973, 1974, 1975, 1976, 1977, 1978, 1979, 1980, 1981 El Camino when it rolled off the assembly line. Trust The El Camino Store for all your parts needs.

El Camino Air Counditioning Compressor Clutch, For A6 Compressor A6 Compressor With 5 Diameter Pulley, 1965-1981:
* Your Name:
* Email (This will not be displayed)
Question:
Ask Question
Muscle Cars & Classics 2022