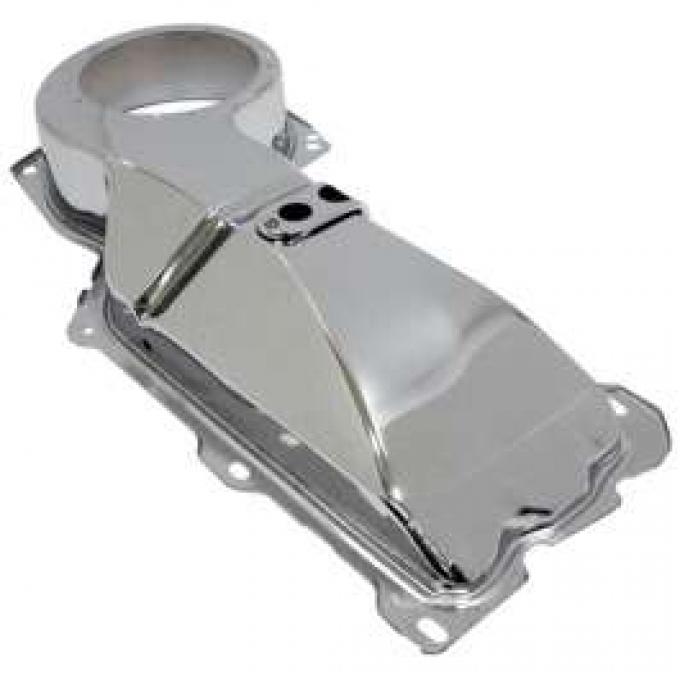 Replacement Quality Chrome Heater Box Cover For Your El Camino Heavy Chrome Plating For A Long Lasting Shine Heavy, Gauge Steel Unlike Other Replacements Offered Elsewhere For All Camaro Models Without Factory Air Conditioning Comes With Heater Flange And Gasket Attached Big Block Applications Only Has your firewall heater box cover gone missing, or been badly dented or rusted? The El Camino Store has the solution with this replacement chrome heater box cover for your 1964, 1965, 1966, 1967, 1968, 1969, 1970, 1971, or 1972 Big Block El Camino. Now you can replace your old, worn heater box cover and at the same time add some chrome under the hood. The firewall box hangs in the engine compartment where it can be damaged from an engine swap and it is exposed to the elements, making it prone to rust. Replace your rusted heater box with this new reproduction chrome heater box which works just as well as the correct ones and gives you that extra advantage under the hood. This heater box comes with a chrome flange plate and gasket already attached. The flange plate is a crucial addition that helps divert your heater hoses away from your 1964-1972 Big Block El Camino. The El Camino Store has only the best parts like this Chrome heater firewall box for your 1964, 1965, 1966, 1967, 1968, 1969, 1970, 1971, or 1972 El Camino, always at the best possible price.