Custom Autosound's USA-630 is designed to provide the best in audio technology wrapped in a classic car stereo look. It will fit your car or truck's stock dash without any modifications required. It has been designed with a bezel containing your car's manufacturer logo as well as large OEM style push-buttons to compliment your dash. When it comes to electronics the USA-630 boasts modern features like a USB input for flash drives to playback MP3/WMA song files and a dock for your iPod. When connected to these devices the radio's digital display will show artist, song, album titles and allow song navigation through the radio itself. The USA-630 is compatible with our optional BLUKIT which enables bluetooth music streaming from your enabled phone as well as hands-free mobile calling through the vehicle's speakers & BLUKIT's built-in microphone. With 300 watts peak the radio provides plenty of power but additionally contains four RCA pre-outs for optional amplifiers. It also comes with Auxiliary inputs for satellite radio tuners, iPhones or any portable player you may wish to use. 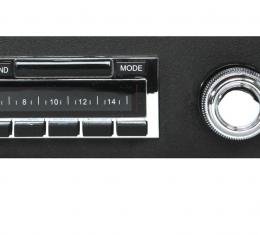 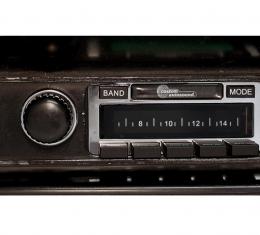